Q: You helped make one of the most monumental discoveries in biology that allows to alter an organism's DNA. Can you tell us how this came about? What lead to the discovery?

A: CRISPR-Cas9 gene editing technology is the result of a fundamental, curiosity-driven science project that came about through our want to understand exactly how bacteria fight viral infection. About 10 years ago, I was asked by my UC-Berkeley colleague Jillian Banfield to look into a genetic peculiarity of bacteria and became intrigued with this rather obscure work.

Partnering with Emmanuelle Charpentier, we realized that the bacterial cellular defense system could be used as a tool to edit genomes, not just kill viruses. In 2012, we co-authored a publication introducing CRISPR’s ability to be used as a programmable gene editing technology. Specifically, the paper showed that RNA molecules transcribed from stored viral sequences in parts of the bacterial genome called CRISPRs function as guides for an enzyme called Cas9 to find and cut matching DNA sequences. By creating a streamlined form of the RNA, we developed the two-component CRISPR-Cas9 system for cutting DNA at precise locations. Cells then use natural DNA-repair mechanisms to disrupt or introduce DNA sequences at the site of the initial cut.

“After developing the CRISPR-Cas9 editing tools, I led its use in a broad range of applications.”

Q: How will genome-editing affect health care and what are some of the key advancements that will positively impact the field? By when can we expect more routing applications in the clinic, agriculture, and other?

A: The power and versatility of CRISPR will undoubtedly positively impact healthcare. The technology is already taking drug discovery and development to a higher level and opening up new and wide-ranging possibilities to treat and cure diseases. Within the next 10 years we could see CRISPR-based therapies for blood diseases such as sickle cell disease (recently scientists used the CRISPR gene editing technique to rewrite the genetic mutation in blood cells that causes sickle cell disease), and various eye diseases (since the eye is a contained but accessible organ that can be monitored externally and has established measures of function). In cancer, scientists are attempting to harness CRISPR to edit a patient’s T-cells (immune cells) so that they have the necessary capabilities to target a particular type of tumor.

Q: Why is it important to think about the ethical ramifications of genome altering tools and how can we ensure we keep it under control?

A: As with any new disruptive and “game changing” technology, we must also be mindful of CRISPR’s unintended consequences and ethical in its application. We have moved from theory to the practical prospect of reshaping the world we live in, including potentially making inheritable alterations to the human genome. Through open discussion and the sharing of information, the scientific community is working attempting to ensure that the technology is not abused and help us as a society to make these vital and profound decisions in the correct way.

Q: Are there any government and regulatory components in place to help guide research and clinical applications of genome altering tools? What needs to be done to ensure better control? How are you directly involved?

A: In 2015, I helped convene an Asilomar-type meeting to discuss the use of CRISPR. The meeting was part of an ongoing effort to lead a global conversation on the implications of CRISPR technology and was followed by a conference convened by the NAS. The outcome of the meeting was a set of guidelines that urged a voluntary restriction on the clinical use of human genome editing. For example, CRISPR should not be used to edit genes in human embryos intended to establish a pregnancy.

At this point, certain countries have approved the use of CRISPR technology for research involving the editing of human embryos, but still not for clinical use to create a genome-edited person. Multiple groups including the National Academies of Science and Medicine (U.S., China) and the Royal Society (U.K.) have called for a voluntary restriction on clinical use of genome editing to provide time for scientific study and societal discussion around this type of application. For now, scientists and clinicians are focused on therapeutic applications that involve somatic cells, which are adult cells that cannot transmit genetic changes to future generations.

Q: What are your thoughts on editing genes in human embryos?

A: A temporary moratorium only on human germ line editing will give us as a society more time to research, understand, and discuss the unintended consequences of applying CRISPR. At this point, we do not have a full understanding of our own human genome and we do not have enough experience with this new and powerful technology that is still in its early stages.

A: Gene editing with CRISPR is a rapidly evolving field that has captured the imagination of people across the globe. By the end of this decade, I believe that CRISPR can bring us closer to mitigating the effects of climate change on agriculture and help us develop cures for many diseases. I am excited and hopeful that CRISPR will continue to open up new possibilities for us to positively impact human life. 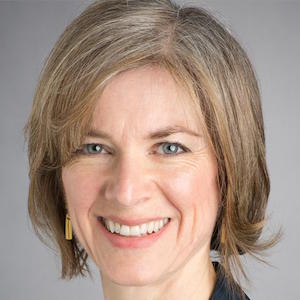 Ph.D., Professor of Chemistry and Molecular and Cell Biology, University of California, Berkeley

Jennifer Doudna, Ph.D. helped launch an ongoing revolution in the fields of molecular genetics and genomics with the monumental discovery of CRISPR-Cas9. This simple to use technique can alter the DNA of any organism using RNA-programmed DNA cleavage, much like a film editor cuts a piece of film and splices in new frames. CRISPR-Cas9 technology is being used in laboratories around the world to advance biological research and this fundamental technology promises to lead to new therapeutics for treating and curing, human disease. This is just the latest chapter in a highly productive career of scientific discovery. Doudna has devoted her career to understanding the function of catalytic and other non-protein-coding RNAs. Using structural biology and biochemistry, Doudna’s work deciphering the molecular structures and biochemical activities of RNA enzymes (ribozymes) and other functional RNAs, along with their protein-binding partners, has shown how these molecules carry out complex activities in cells. Dr. Doudna has been an investigator with the Howard Hughes Medical Institute since 1997. In 2000, while holding a professorship at Yale, she was honored with the Alan T. Waterman Award, given annually by the National Science Foundation to an exceptional young scientist. In 2002 she accepted a faculty position at University of California, Berkeley where CRISPR-Cas9 was discovered. Jennifer Doudna earned her Bachelor of Arts degree in Chemistry from Pomona College in 1985, her Ph.D. in biochemistry from Harvard University, and she conducted her postdoctoral work at the University of Colorado, Boulder.

The Genome Engineering Revolution
Facile genome manipulation using precision DNA recognition is transforming biology. I will discuss how the bacterial CRISPR adaptive immune system was harnessed as a powerful genome engineering tool, enabling remarkable developments using this technology to modify, regulate or visualize genes in a wide variety of cells and organisms.